Sahara desert from Fes to Marrakech start by Fes exploring with local/professional guide, then visit the blue city of
Chefchaouen. As we always recommend, your Morocco journey isn’t complete without Sahara Desert Experience, Camel Ride across the Erg Chebbi sand dunes and night in a camp.
Moreover, drive along the valley of thousand Kasbah and the High Atlas Mountains. Finally end the Sahara Desert tour with Marrakech culture experience. 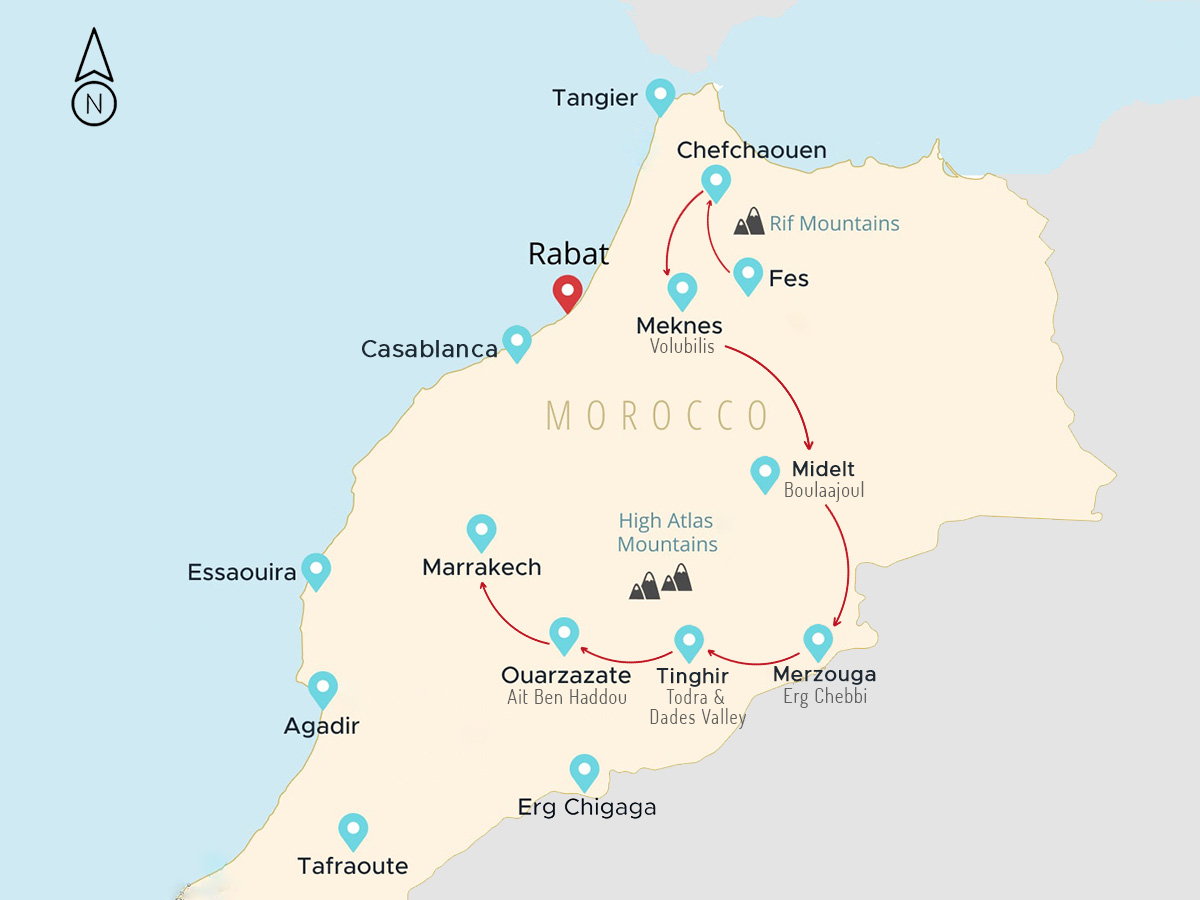 A very warm welcome to Morocco with T-D-T

You will be welcomed at Fes Saiss Airport, by one of our professional driver/guide then depart to your Riad where to spend the night and take a rest.

Beyond Marrakesh, Fes should be on your Moroccan bucket list!! We suggest you enjoy the itinerary in your way!

Dar El Makhzen: it's a Royal Palace founded by the Marinid Dynasty in 1276.

The Al Attarine Madrassa: It is considered one of the highest achievement of Marinid architecture.

Al Qarawin Mosque from outside: Al-Karaouine University for the Islam religious and legal sciences with heavy emphasis on, was founded by Fatima Al-Fihr in 859.

Chouara Tannery: where we make the leather, it is the highest Artesunate Export from all over Morocco, mixing tradition and modern process.

Commence the Trip in the morning to leave Fes for visiting Chefchouen by the afternoon. An easy afternoon in Chefchaoun to explore one of the most beautiful cities in Morocco, one of the stunning villages at the feet of the Rif mountains. The Chefchaouen medina had a Spanish- style square surrounded by many funky arts and crafts stores, roof-top restaurants and cafes where you will spend your night in a nice place to enjoy the breeze and the beauty of nature

After breakfast in your hotel leave Chefchaouen for the Roman ruin of “Walili” -Volubilis-, great ruins with a stunning scenery that will grape your attention when you are about to explore them. Process to Azrou, particularly at the cedar forests that are famous for the Barbary Apes so as to feed them, after lunch we will will keep driving to BOULAAJOUL a small town on the half way to desert from Fes that to break the long driving. Spend the night in our suggested hotel and be ready for the Sahara desert on the next day

Today we will start our day by traveling through the Tizi Ntalghamt pass to Midelt and along the magnificent Ziz Gorges carved through volcanic rock, you’ll see views of the Middle Atlas plateau and the scenery changing to reveal hints of the desert as you approach the city of Errachidia. After you arrive in the Sahara Desert you will Change from Car to a dromedary ( Camel Ride) to cross dunes to spend the night ina camp. At the camp you will be welcome by a glass of tea before you get to your tent with private shower, dinner will serve at any time you want even 20 Minute after you get your Private Tent. After dinner you will have chance to experience the Berber night which is to drums around the fir and dance the Berber’s way. Finally, sleep time is at your leisure, but please be respectful for those who have turned in for the night.

Your camp guest will wake you up early in the morning to watch what well may be the best sunrise of your life. After breakfast you’ll peacefully camel-trek back to Merzouga appreciating the unique beauty of the spectacular Erg Chebbi dunes – changing with the light as the day progresses. Meet your driver to leave for Risaani a local market where you will see the real of Morocco. Afterward leave for Tinghir and the Todra Gorges They are spectacular limestone river canyons to discover and appreciate its beauty. Finally arrive in the Dades Valley where we will have dinner and spend the night.

After breakfast we’ll drive through the Dades Valley towards Kalaat Mgouna and Ouarzazate. The route through the Dades Valley, the way of the thousand Kasbahs, provides numerous photo opportunities. We may visit the Roses valley and Skoura village, then continue to Ouarzazat, “the Hollywood of Africa”. Lunch is at the famous Ait Ben Haddou kasbah, the largest Kasbah in Morocco. After touring this UNESCO World Heritage site, our journey will continue through the majestic Tizi n Tichka pass, reaching an altitude of 2260m, over the High Atlas Mountains. We will stop to enjoy the impressive views and visit the Argan oil cooperative if you are interesting in that. We will arrive in Marrakech late afternoon.

Discover the city of Marrakech in this enlightenment day. Immerse yourself into the history, art and culture of this magnificent walled pink city:

Palais Bahia: Is a palace built in the late 19th century, intended to be the greatest palace of its time.

Mellah: The area of the first Jewish settlement.

Jemaa El-Fna square: is the main pulse of Marrakech.

Koutoubia Mosque: Is the largest mosque in Marrakech, Located nearby the Square.

Saadinn Tombs: Those tombs were created to stand as the final resting place for the many rulers and members of the Saadi dynasty.

Majorelle Garden: It is the creation of French painter Jacques Majorelle, who spent 40 years injecting his passion and creativity into this magical garden.

MARRAKECH - TRANSFER TO THE AIRPORT

If you can provide us with your flight details is much better thanks!

Don’t hesitate to contact us for more information and change about the above itinerary.

Fully customized private tour in Morocco, discover our desert tour starting from Tangier, passing by Chefchaouen, Fez, the Sahara Desert, the Atlas Mountains, Marrakech and the Atlantic Ocean at Essaouira.

4 Days Desert Tour Fez Marrakech, discovering Merzouga the desert of Morocco. Great views will make you wonder at its beauty. An experience riding the camels, and sleeping in the desert yurts. With this 4 days fes tour. Do not miss a Morocco Desert Tour ether from Fes or Marrakech

3 Days Tour Marrakech Desert, discovering Dades Gorges in the desert of Morocco. Great views will make you wonder at its beauty. An experience riding the camels, and sleeping in the desert yurts. With this 3 days tour, you will be totally happy with the experience.

Morocco Private Tour from Casablanca allows you to explore Morocco Imperial cities, the North of Morocco and the sahara desert.